You are here: Home / just for fun / Merry Christmas – a tale to warm your heart

My Mom should have been a writer. Instead, she made up stories and told them to my kids. Very few of them were ever written down. Fortunately, this one was put on paper. I hope you enjoy it.

by Julia Winters
The little tree was desolate. It was already getting dark on Dec.24th. He had dreamed for years of being a big 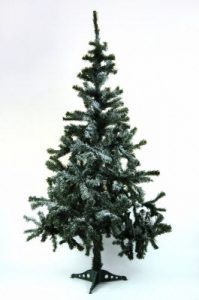 beautiful decorated tree with people dancing around him and opening gifts. Now it was too late. Maybe they wouldn’t even send him to the chipping mill.

He had been planted at a Xmas Tree farm. All the other trees had grown fast and been trimmed and fertilized. No matter how he tried, his little roots could not reach the nutrients and water that he needed. He was the only tree that had been planted next to the road and at the top of the hill.

Rain ran off before he could drink enough and the cultivator never came near him. He remembered that the crew foreman had scolded the boy who planted him and sent him somewhere else. When he was cut down this year, he had hoped that he had finally gotten big enough for someone to want. Now he lay there on the super market parking lot and felt sorry for himself.

Carl French was feeling sorry for himself too. Last year, Christmas had been so different. Now Daddy was gone and he and his mother had moved to a one room apartment far from their old home. Mrs. French had said, “No, Carl you must understand. I spent the last cent I had to get groceries enough to last until my check comes next week. Anyway, where would we put a tree in here?”

“Oh Mom, I know you are right. It just doesn’t seem like Christmas, that’s all.”

The payment on the house they had sold was all the money they had to live on. When he was old enough to work and earn money, then they could have Christmas again.

Carl wandered down the street to where the unsold trees were being loaded on a truck to be carried away. “How much is this tree?” he asked the attendant.

“Twenty five cents”, he answered, “Want to buy it?”

The clerk wondered just how much the kid really wanted it. “If you take this broom and shovel and clean up the mess on the pavement, I’ll pay you twenty five cents.”

“Really?” It was the first time anyone had ever offered Carl a real job. As the clerk nodded he grabbed the broom and started cleaning up the pine needles and sawdust and pieces of board the men had left when the made stands for the trees they had sold. Carl worked fast. He was afraid
the man would change his mind.

“That was a good job, kid, fast too. Here is your money.” He watched Carl’s face curiously. Did he really want the puny tree?

“Oh no, mister, I want to have that little tree. We couldn’t have a tree this year because we couldn’t afford to buy one. Now we can have a real Christmas.”

“This is the one you wanted, isn’t it?” he stooped to pick it up.” I’d better nail a stand on it for you. It is much too small to fit a regular stand.” As he moved away he pretended great surprise.”

I thought you said you didn’t have any money! You must have dropped this fifty cent piece when
you were looking at the tree.” 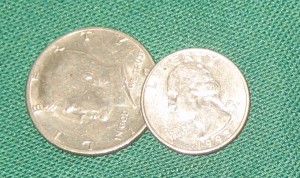 “Honest mister, it’s not mine. I didn’t have any money at all.”

“Well, it’s yours now. It was under the tree you bought. You can use it to buy a Christmas present.” Carl was so excited he could hardly wait for the stand to be built. He did remember to say thank you though.

The second hand clothing store where they had bought Carl’s school clothes this year was in the next block and on his way home. He was sure there would be something he could buy for fifty cents in that place. He felt guilty about wanting a tree so much that he had forgotten he had no gift for his Mom, but if he hadn’t bought the tree he wouldn’t have found the fifty cents. He knew Mrs. Oldham, who ran the store and knew she would help him.

“Look Mrs. Oldham, I found fifty cents. Would you help me find something for my mother with that much?”

She looked thoughtfully at Carl and tried to remember who would be his mother. He was so engrossed that he didn’t notice her hesitation. “I have some very nice earrings that are on sale today for half price. Any woman would love them, I’m sure.”

“That would be keen”, he said, “I knew you would know what my Mom would like.”

Just then another customer walked in and greeted Carl like an old friend. “What are you doing, Carl? Some last minute Christmas shopping, I’ll bet.”

Now Mrs. Oldham had a name, she recalled the last time Carl and Mrs. French had been in the store. “Carl has decided to buy earrings, but now we have to know if her ears are pierced or not. Maybe you can help him to pick out which pair.”

“I know she has holes in her ears.” Carl spoke up. “She told me it hurt like everything when they made them. It was

before I was born.”

Carl was in a hurry to get home with his tree. He picked a pair of dangly blue earrings that he was sure would match his Moms best dress. Mrs. Oldham wrapped them in Christmas paper for him and suggested that he wait until morning to give them to her.

Carl ran through the apartment house door and up the steps calling,” Mom, Mom,” at the top of his lungs.

Mrs. French was at the top of the stair before him. “What is the matter? Are you hurt? Stop hollering and tell me.” she scolded. “You will have everyone in the house out here.”

“Mom, I got a tree! See! Isn’t it swell? It’s not too big, either.” Every door was open to hear what Carl was so excited about. Carl was the only child in the 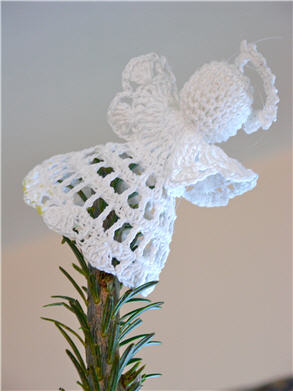 house and the tenants all took a special interest in him. Now some of them came over to inspect his tree and hear the story of his find.

“Come in and eat your supper now, Carl. After that we will find some decorations for it. There is a box in the storage basement that I brought with us when we moved. We can get some from there.”

If anyone asked Carl what he had to eat that night he wouldn’t have known. All he could think of was the tree.

“Can I ask people to come over and see my tree?” Carl coaxed. “It’s so pretty now that it has all the trimming on it.”

“We only have two chairs.” Mrs. French reminded him. She was so pleased to see him so happy that she couldn’t bear to say no. “You will have to tell them to bring a chair along.”

The little tree was happy too. Suddenly the branches seemed fuller and greener. He felt as if he were glowing. At last somebody had said he was pretty. In the next hour the room filled with people. At first they came without chairs but soon went back after them as they began visiting with others and wanted to stay. Mr. Roberts brought his tape player and put some Christmas music on. Mrs. French made coffee and produced the cake she had planned to surprise Carl with the next day. Mrs. Swartz treated them to homemade fudge and gave Carl a bottle of Root Beer.

The little tree was having a real party. Without him, all those people would be sitting alone.

Mr. Snyder, the janitor, finally said “It’s getting pretty late for all of us folks. We have to go to church in the morning. My wife and I have been sitting here studying. We probably all planned something special to have for dinner tomorrow. Probably more than we can eat. It usually is. What would you say to putting it all together and having a feast? There is an empty apartment right now, we could all meet in there. I could help Carl move the tree, and we could bring our chairs and dishes and have a bang up time together. What do you say folks? If any of you are expecting company, you could bring them along.”

The response was terrific. They all agreed the little tree had turned acquaintances into neighbors. From now on they would have fun together.

The little tree was the happiest of all. He had not only been a real Christmas tree and been to a real party, just as he had dreamed of, but tomorrow would be another party.
Merry Christmas Everyone. 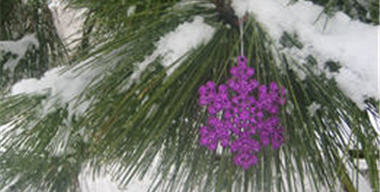