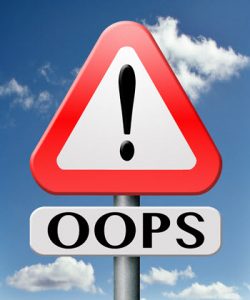 reader a feeling that something is “off,” but what is it? We have to re-read to find the problem, and of course that interrupts the entire flow of information.

These errors wouldn’t be so common, except for the fact that they also sneak by the writer. It sometimes takes proofreading by another person to catch them.

Sneaky grammatical errors can do damage


The purpose of writing (or speaking) is to communicate. Errors of any kind get in the way of that communication.

Anything that makes the reader stop and look twice interrupts the flow of information.  When you are writing for marketing purposes, that matters a great deal.

The ultimate goal of a marketing letter, blog post, web page, etc. is to create a seamless flow of information from your brain to your reader’s brain. He or she should be able to absorb your message without having to stop, re-read, and think about what you meant.

Is that one buyer or two?

A blog post I read recently is a prime example of how sneaky grammatical errors cause confusion. The agent wrote “I had the buyer and they were willing to pay the purchase price.” And then later, “Fortunately for my buyer’s…”

This poor writer couldn’t quite agree with himself about whether his buyer/buyers were singular or plural. (Just so you know, he was talking about a married couple – so, two people.)

And then, he forgot that you don’t use an apostrophe to form a plural. That, by the way, is a very common error. It belongs with other sneaky grammatical errors because writers so often don’t notice when they’ve made that mistake.

Have you ever read an agent bio in which the writer kept changing positions? It started out in 3rd person – someone writing about the agent – then occasionally switched back to first person. I’ve seen several like that.

I read one recently that was written in third person until the last sentence.

The bio went on and on about what a fantastic agent “Sally” was.  Then, the last paragraph said “So, when 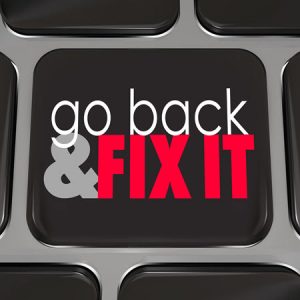 Wait a minute. You just told me it was Sally who was wonderful and now I’m supposed to call you? Who are you?

Put modifiers in their place!

The person who wrote this report on home building could have eliminated the speed bumps in his narrative by simply putting the modifiers where they belonged.

The writer thought he needed to explain the significance / use of those products, but improper placement served to confuse.

Again, if the sentence structure makes a reader stop and think about it, it’s an error.

The following, taken from a 2019 article I saved, shows the importance of reading what you wrote.

“Also, the direct online buyers, known as iBuyers, are attempting to lure home sellers by eliminating the listing agent in selling a home but instead utilize their services.”

You can figure out what the writer meant, but it takes a minute.

They can and will find their way in. So proofread carefully. If possible, get another person to proofread after you’re finished. Sneaky grammatical errors can derail your messages, so eliminate them!

When you need help writing an important message…

Get in touch! Writing for real estate is what I do, and I’d love to add you to  my list of happy clients. Browse the menu at the top of this page to see the full range of services I offer.

Meanwhile, if you’d like more real estate grammar advice, check out these articles from my Active Rain blog.