You are here: Home / real estate marketing / When Marketing Your Real Estate Services – Persistence Pays Off

Many years ago, as I sat in front of a typewriter pounding out prospecting letters, another agent stopped by my desk to laugh at me for the effort. He said he had tried it once and it didn’t work. 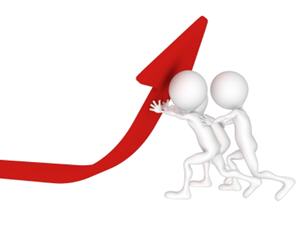 I said OK and kept on doing what I was doing.

I found out later that he had mailed one letter – to one person.

He was clueless about marketing. But… I was also clueless, because I hadn’t learned the value of persistence.

At that time I was sending perhaps 2 or 3 letters – and waiting a month or two in between. And that’s just not the way to create an impression. I was also sending only one letter to expireds and FSBO’s.I thought “If they’re interested in listing, they’ll call.”

Keep in mind that at that time I hadn’t studied copywriting or marketing – so didn’t know just how much I didn’t know. (I cringe when I think of the opening sentences in those early letters.)

Later I began to read and study marketing techniques. And I learned that studies show that the greatest return comes after at least 5 “touches.” Touches can be a letter, a postcard, a phone call, an email, or even an in-person visit. And if you wait 2 months to re-contact a “cold list” it’s likely that the person won’t even remember that they’ve heard from you before.

Lack of response from your first letter doesn’t mean they don’t need you and won’t ever call. It might only mean that your message arrived on the wrong day.

In other words, they may be interested, but today is not the day. So your message goes unread.

Or – they might read your first message and put it aside to tend to later. We all know what can happen then. They might have good intentions, but your letter gets lost.

So be persistent. Keep sending letters with information that shows both your caring and your expertise. Your chance of a response will go up with each message. So will the chance that your prospect will read your next message, and your next, until they feel like they know you – and become convinced that YOU are the agent they need.

Choose your target audience – be it expireds, FSBO’s, underwater homeowners, senior citizens, people who live in a specific type of home, or a geographic area.

Then write good letters – or use some of my pre-written letters – and be persistent.

I offer more than 40 real estate prospecting letter sets – for sellers, for buyers, and even for keeping in touch with past clients.
So if you aren’t up to writing your own good letters – come take advantage of mine.